What Is Constellation (DAG)?

Constellation (DAG) is a protocol that professes to enable indefinite scalability by utilizing a directed acyclic graph design to reach consensus. Constellation is advancing smart contracts by enabling data sources to be integrated into distributed ledger technology through the DAG protocol and bespoke state channels (DLT).

The founding team of the project made the decision to reconsider the conventional approaches to a number of issues facing current blockchains, such as scalability and centralization. Constellation provides the ability to link to external datasets through simple APIs, enabling the secure analysis of huge data. Its technique is made possible by a modification to the idea of reaching agreement via a serverless architecture.

The Constellation protocol aims to provide a solution to the ongoing scalability issue in the blockchain industry. The project's ability to scale in line with user demand and quantity of users is its primary differentiator. The amount of network bandwidth increases directly as more users join Constellation. Proof-of-meme (PoM), a consensus model used by Constellation, is built on the idea of rewarding and favoring nodes with a positive reputation. A Java Virtual Machine powers smart contracts on the Constellation Network (JVM). Although the reasoning behind these contracts is a little more complicated, they perform similar tasks to smart contracts on the Ethereum (ETH) network.

The developers of Constellation released Orion in June 2018, enabling the community to earn DAG tokens to take part in a variety of Constellation events. The community's objective is to compile data and content from the internet into a single, authoritative location.

The architecture of the Constellation Network is made up of various elements, including:

The native token of the Constellation Network is Constellation (DAG). 3.71 billion tokens can be purchased in total, with 1.27 billion already in use as of October 2021. On June 15, 2018, the DAG token ICO came to a finish. DAG was developed as an ERC-20 coin that connects various network elements and provides seamless communication between government channels and nodes. Additionally, Molly, a native cryptocurrency wallet created by Constellation's developers, has been made available to improve user experience.

Constellation (DAG) and the U.S. Air Force agreed to a partnership in the summer of 2019 to automate the latter's big data management, which can be seen as a testimonial to its security. In the summer of 2021, Constellation expanded on this and will now offer end-to-end security for communications between the U.S. Department of Defense and its business partners. Constellation collaborated with Kinnami Software to use the Hypergraph Transfer Protocol in order to provide a strong data security offering based on blockchain encryption and distributed data management.

By adding nodes to the network and utilizing its DAG architecture and Proof of Reputable Observation (PRO) consensus, Constellation's Hypergraph can scale. On Constellation, everything is managed automatically via smart contracts that offer microservices using the pre-existing JVM ecosystem codebase.

At Constellation Labs, Benjamin J. Jorgensen serves as CEO. Prior to that, he founded Klick Push as its first CEO. He is also a co-owner of MZ Dining Group (Ittoryu Gozu) and the proprietor of A5 Meats.

Constellation's Chief Revenue Officer (CRO) is Benjamin Diggles. He is in charge of working with businesses and governments, as well as implementing Constellation's worldwide partnership strategy and consortia projects. Diggles has held positions with Oracle, Universal Pictures, and Disney before joining Constellation Labs.

Constellation's chief operating officer (COO) is Mathias Goldmann. Previously employed by the European Central Bank and PricewaterhouseCoopers, Goldmann joined Constellation Labs as vice president of finance in October 2017. He now directs the creation and execution of company operations in his capacity as COO. Additionally, he establishes the guidelines for the vision and corporate culture of Constellation.

Chief Technology Officer (CTO) for Constellation and the person who created the Constellation protocol from the ground up is Wyatt Meldman-Floch. Meldman-Floch has worked for firms including Zignal Labs and Rally Health in addition to her time spent as an intern and researcher at NASA Ames Research Center. 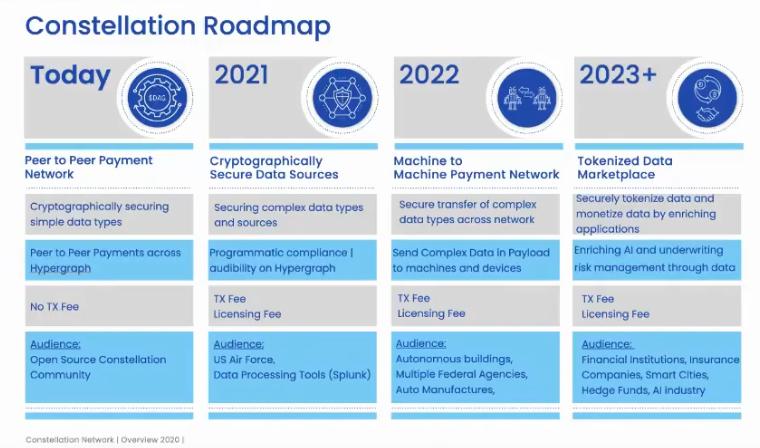 Where to store Constellation (DAG)

An alternative wallet provider for Constellation token holders can be Trust Wallet – a multi-currency mobile wallet that enables users to simultaneously store a variety of digital assets in one place. Popular among traders and gamers, the beginner friendly mobile wallet may be appropriate for users looking for a convenience and accessible app, with trusted security and backup options.

Similarly, a user-friendly option to keep your $DAG secure can include MetaMask, a leading browser wallet extension popular amongst DeFi platforms and highly praised by developers. Users can integrate with the network’s Liquidity Mining pools by connecting your MetaMask wallet.

The Atomic Wallet is another wallet provider that supports the Constellation (DAG) coin. This software wallet can be downloaded on to a desktop or mobile device and offers a wide range of features such as, enhanced anonymity, decentralisation, and security.

Where to buy and sell Constellation (DAG)

If you choose to Sell Constellation (DAG) you can send us the coins and receive a payment to your bank account. Details and valuation can be found on our Sell Coins page.