What Is District0x (DNT)?

District0x is a platform that enables users to efficiently establish their own decentralized platforms that are managed by a decentralized autonomous organization (DAO) structure. It is marketed as a "network of decentralized markets and communities." These platforms can all be launched for free on the district0x and are each referred to as "districts." The unique d0xINFRA framework, which offers a set of fundamental smart contracts and libraries users may use while building up their districts and enables a wide range of potential use-cases, powers the ecosystem. DNT, an ERC-20 utility token that is primarily utilized for community governance, is the ecosystem's native coin. The platform combines the InterPlanetary File Transfer Protocol, Ethereum, and Aragon as its three primary technologies (IPFS).

Districts are built on the Ethereum blockchain; however, the district0x network uses Aragon as its governance layer, giving DNT stakeholders access to governance proposals and voting rights which have the ability to influence the growth and functioning of the districts of their choice. Last but not least, the district0x website source code and user uploads within districts are served using IPFS.

In order to address some of the inefficiencies associated with developing and running distributed community marketplaces, District0x was developed.

In addition to offering a straightforward framework for community governance, it accomplishes this by offering a wide variety of smart contracts and front-end libraries that developers can use to quickly build their own districts.

Developers can construct a district for free, unlike some other platforms that require a fee to launch new applications, albeit a refundable deposit must be paid to be listed to the District Registry. This convenient access platform has already given rise to a variety of prosperous districts with various forms and purposes. The decentralized employment market Ethlance, the peer-to-peer ENS names marketplace Name Bazaar, and Meme Factory are some of the more well-known districts. The latter offers a straightforward interface for producing uncommon digital assets. 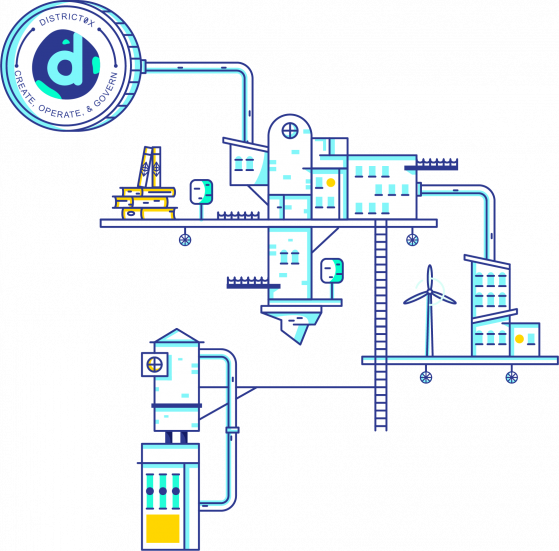 The 180 million DNT set aside for fundraising must still be made available. This could potentially be burned at a later time, according to the district0x team. There might also be an unspecified number of team and other reserved tokens that are not in use.

An ERC-20 token is DNT. As a result, it is protected by the Ethereum blockchain's foundation. This employs a proof-of-work (PoW) consensus process as of January 2021 to guarantee the network's security against attacks. A proof-of-stake (PoS) network will eventually be used to safeguard Ethereum as it evolves into Ethereum 2.0, providing comparable levels of defense against assaults at a reduced energy cost.

Former professional poker player turned derivatives trader Joe Urgo has a long history of serving as a consultant in the Bitcoin industry. In addition, he is the creator and CEO of Sourcerers, a consulting company that offers crowdsale and tokenization services.

Programmer and developer Matus Lestan has worked with web and mobile applications for about ten years. At district0x, he is the lead developer at the moment.

Most of the district0x crew, aside from the co-founders, remains hidden from the public. However, according to the district0x salaries transparency page, the company employed at least five more contractors at the beginning of 2021.

Where to Store District0x (DNT)

A trusted wallet provider for your District0x (DNT) token could be Trust Wallet – a multi-currency mobile wallet that enables users to simultaneously store a variety of digital assets in one place.

Similarly, a user-friendly option to keep your $DNT secure can include MetaMask, a leading browser wallet extension popular amongst DeFi platforms and highly praised by developers. Users can integrate with the network’s Liquidity Mining pools by connecting to your MetaMask wallet.

All ERC-20 tokens including District0x (DNT) can be stored on the Ethereum blockchain using MyEtherWallet, allowing users to interact with the network without additional software.

Leading hardware wallet providers such as Ledger and Trezor are integrated with District0x (DNT), wallets are supported on their devices. If you are looking to hold a large amount of District0x (DNT), ledgers offline storage solutions can offer a high level of security.

Where to Buy and Sell District0x (DNT)

You can Buy & Sell District0x (DNT) by heading over to the Buy Coins page of our website. District0x (DNT) is available on BC Bitcoin trading against major fiat currencies: GBP and EUR. Buying $DNT has never been easier, simply place your order and provide your wallet address. Once your payment arrives District0x (DNT) will be sent directly to your wallet.

If you choose to Sell District0x (DNT) you can send us the coins and receive a payment to your bank account. Details and valuation can be found on our Sell Coins page.