Like other blockchains, Ethereum has a native cryptocurrency called Ether (ETH). ETH is digital money and if you’ve heard of Bitcoin, ETH has many of the same features. It is purely digital and can be sent to anyone anywhere in the world instantly. The supply of ETH isn’t controlled by any government or company - it is decentralized, and it is scarce. People all over the world use ETH to make payments, as a store of value, or as collateral. But unlike other blockchains, Ethereum can do more. Ethereum is programmable, which means that developers can use it to build new kinds of decentralized applications with many ERC-20 tokens now built on the network. The Ethereum network is a marketplace for financial services, games and apps, social media, NFTs and much more.

Ethereum is moving from the Proof-of-Work (PoW) consensus mechanism to Proof-of-Stake (PoS). It was always Ethereum’s plan to scale this way via the Eth2 upgrades. Eth2 refers to the interconnected upgrades Ethereum will implement to make the network more scalable, secure and sustainable. These upgrades are being built by multiple teams from across the Ethereum ecosystem. It is a big technical challenge to get PoS right and it is not as straightforward as using PoW to reach consensus across the network.

In 2011, 19-year-old Vitalik Buterin, a programmer from Toronto, first grew interested in Bitcoin. He then went on to code for the privacy-minded Dark Wallet and the marketplace Egora. Later, he released a white paper in 2013 describing an alternative platform designed for any type of decentralized application developers would want to build. The system was called Ethereum. Co-founder Dr Gavin Wood wrote the Ethereum yellow paper, the “technical bible” that outlines the specification for the Ethereum virtual machine (EVM) that handles the state of the ledger and runs smart contracts. To get the project off the ground, Buterin and the other founders launched a crowdfunding campaign in July 2014 where participants purchased Ether, or the Ethereum tokens that functioned as shares in the project. 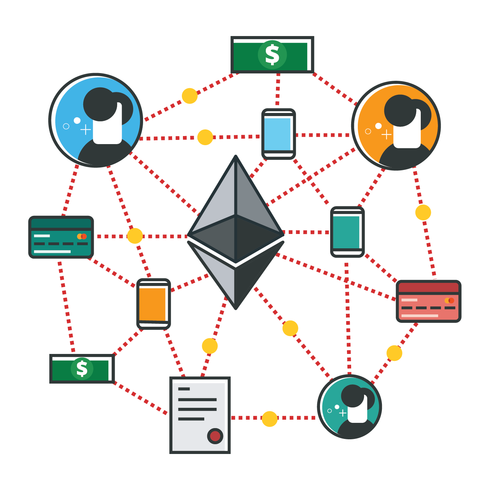 Since its initial release in 2015, Ethereum has been a platform for decentralised applications, serving as an extremely powerful computer with no risk of downtime or third-party interference. The network provides a virtual machine called EVM (Ethereum Virtual Machine) which executes scripts through a public node network. The team of Ethereum developers have put forward many improvements to the system throughout the years. The development of the project has been split into four main development stages, each of them symbolising a certain period of progress – Frontier, Homestead, Metropolis and Serenity.

Ethereum requires mining just like Bitcoin, please see our Bitcoin Coin Guide if you haven’t already. While conceptually the two are much alike, there are significant technical differences between ETH and BTC. Some are more obvious; for example, Ethereum are added every 15 seconds (on average) while bitcoin blocks are added every 10 minutes (on average). As a reward, Ethereum miners receive 2 ETH plus all transaction and code-processing fees. As for the mining algorithm, Ethereum uses a hashing algorithm known as Ethash which is different than Bitcoin’s SHA-256. Ethash is incompatible with the special hashing hardware developed for Bitcoin mining. Moreover, it’s a memory-hard algorithm; meaning it’s designed to resist the development of Ethereum-mining ASICs. Instead, Ethash is deliberately best-suited to GPU-mining. With Eth2 upgrades imminent, Ethereum’s vision may come to light by making the network more scalable, secure and sustainable.

DApps stands for Decentralized Applications. Just like with applications on the app store, developers can build on top of Ethereum’s blockchain infrastructure. Ethereum is perhaps the best platform for building DApps. Thanks to its very own language, Solidity, this enables developers to form smart contracts using the Ethereum Virtual Machine.

Tokens can represent virtually anything in Ethereum:

1000s of ERC-20 Tokens have been built on the Ethereum network such as stables coins like Tether (USDT), USDC and TrueUSD, and many other well-known coins such as ChainLink (LINK) and Basic Attention Token (BAT). The ERC-20 introduces a standard for Fungible Tokens meaning they have a property that makes each Token to be exactly the same in type and value of another Token. For example, 1 BAT (an ERC-20 token) will always be equal to another 1 BAT. This then makes Non-Fungible-Tokens (NFTs) more understandable as each NFT will be unique of type and/or value and no 2 NFTs will ever be the same.

Minting and No Supply Cap

The current supply of Ethereum (ETH) is 116,151,586 ETH with no maximum supply limit (as of 4th June 2021). Each time a new block is mined, a current reward of 2 ETH is won by the entity or individual who solved the equation. However, since this has raised concerns about inflation in the Ethereum community, co-founder Vitalik Buterin brought in an Ethereum Improvement Proposal (EIP) in April 2018, with the hope ‘to ensure the economic sustainability of the platform under the widest possible variety of circumstances.’ Suggesting a cap of 120 Million ETH. Yet, this has still not been accepted.

Ethereum (ETH) stands out from other cryptocurrencies because of its versatility. Unlike other networks, Ethereum is the world’s leading programmable blockchain. You can build on top of it, just as many have done so already. The team have a well-established plan for the future offering stability and a sense of direction for the coin. Ethereum has been one of the top 3 cryptocurrencies in terms of market capitalisation and doesn’t look to lose its place anytime soon. They are also looking to move into a Proof-of-Stake algorithm which will be interesting to see what happens as they implement the Eth2 upgrades.