What is Helium (HNT)

Helium (HNT) is a decentralised blockchain, July 2019 the project was launched with ambition to provide a huge network built upon by both individuals and businesses which is referred to as ‘The Peoples Network’.

The Peoples Network is built using a unique incentive structure that rewards hotspots with Helium (HNT), these hotspots are built up using a web of low powered wireless devices often domestically owned or connected to a brick-and-mortar businesses. The Helium tokens are then distributed based on a multitude of factors that directly correspond to how much utility the hotspot gives to the network.

There are multiple tasks that hotspots can perform that support the network, in return the hotspots are rewarded with Helium (HNT) accordingly.

Challengers, Hotspots are chosen by the network to issue challenges, encrypted messages over the Internet to a target group of Hotspots. Challenges are used by Proof-of-Coverage (PoC) to validate wireless coverage. Hotspots can issue challenges from any location, not just to local Hotspots. 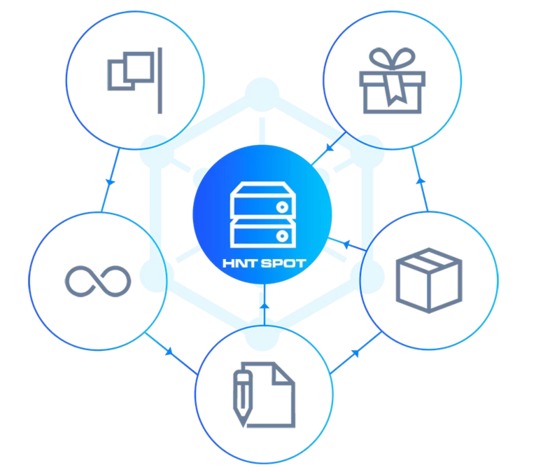 Proof-of-Coverage (PoC) - Hotspots earn a share of Helium (HNT) for participating in PoC and validating their peer’s wireless coverage. The amount each Hotspot earns depends on how often it is directly involved in PoC activity.

Witnesses - Hotspots that monitor and report PoC activity (beacons) of other Hotspots receive a portion of Helium (HNT) depending on how much activity they have witnessed, and the reward scaling of the Challengee.

The Peoples Network offers an impressive arsenal of possibilities that range from both domestic purposes to government and industrial solutions.

Helium offers mobile data connectivity without the associated costs. Telecom providers are subjected to hetfy infrastructure costs, maintenance, boots on the ground workforce and distribution. Added benefits of the network include the ability to pay based on device usage, connectivity without the need for a SIM card, the ability to pool your data across multiple devices and unlimited usage.

Partnering with micromobility tracking firm Lime, the Helium network has facilitated the framework necessary for simplified tracking of personal items such as skateboards, scooters, bikes and cars. Using the Helium network will reduce both the energy costs and monetary costs for Geolocation by using the standard Helium radio module.

Environmental monitoring is another surprising resource it has monetised. Conserv works with galleries and museums to preserve historically significant collections, priceless art works and other sensitive artistic endeavours. The firm relies on and entrusts Helium’s network to monitor factors such as humidity, temperature and many other considerations that can be of detriment to the items even down to vibrations.

Other domestic purposes that utilise the network is firm NOWi’s analytics operating on the Helium Network that delivers information relating to water pressure, waste and other historic data. These metrics are monitored as a pre-emptive measure against water leaks, the leading cause of property damage.

Helium’s network has grown rapidly to over 140,000 unique hotspots currently, which has green lighted plenty of projects to go ahead with plans for it to expand its internet service provider (ISP) capabilities, progress towards providing 5G services. On April 14th, the Helium community voted to pass HIP (Helium Improvement proposal) 27, which effectively paves the way for the Helium Network to become the first consumer-owned 5G network in the world, which has been aptly named FreedomFi.

FreedomFi is set to utilise the Helium (HNT) token using a protocol referred to as Burn and Mint Equilibrium. This process requires Helium tokens to be used as payment in return for services valued in credits using a fixed exchange rate.

Helium 5G services are employed by burning Helium in exchange for Data Credits, the price of Data Credits is fixed in USD (1 Data Credit = $0.00001). Similar to pre-paid mobile data plans or airline miles, Data Credits are non-transferrable, and can only be used by their original owner.

To maximise the services for 5G, the network has increased measures to ensure the validators cannot be encouraged into falsely representing their location and/or coverage capacity. They’re also improving the network graph analysis to provide better incite for miners and network users. Additionally, collaborations with DeWi (Decentralised wireless internet) to fund research grants for minimizing Proof-of-Coverage gaming.

More proposals and improvements are being deliberated within their HIP systems however, Heliums primary focus is strictly based around ensuring its network is optimised and accurately representing its coverage before rolling out its FreedomFi 5G services.

Amir Haleem is the Chief Executive Officer (CEO) and co-founder of Helium (HNT); Haleem has previously served as the Chief Technology Officer (CTO) at Diversion as well as a Lead Game Designer at esteemed videogame development platform, DICE. He is also a co-founder of esports community esreality.com and was a founding member and director of Global Gaming League.

Marc Nijdam is the CTO for Helium (HNT); Nijdam has previously occupied roles as a researcher for Hewlett-Packard, Senior Director at Qualcomm and Senior Principal Engineer at Yahoo amongst other prominent roles which total to 25 years technology and leadership experience.

Frank Mong is Helium’s (HNT) Chief Operations Officer (COO) and brings with him 20 years of cyber security experience. Mong currently serves as an advisor for HackerOne alongside his responsibilities at Helium (HNT) that are currently business development, sales and marketing.

Where to Store Helium (HNT)

To get the maximum utility options available for Helium, they recommend their native Helium Hotspot app as a wallet which can be downloaded for iOS or Android phones. The Helium Hotspot app also functions as a Hotspot management centre as well as providing standard wallet features such as sending receiving and staking.

Where to Buy and Sell Helium (HNT)

You can Buy & Sell Helium (HNT) by heading over to the Buy Coins page of our website. Helium (HNT) is available on BC Bitcoin trading against major fiat currencies: GBP and EUR. Buying Helium (HNT) has never been easier, simply place your order and provide your wallet address. Once your payment arrives, Helium (HNT) will be sent directly to your wallet. If you choose to Sell Helium (HNT), you can send us the coins and receive a payment to your bank account. Details and a live valuation can be found on the Sell Coins page.