Nano (XNO) is a peer-to-peer, decentralized cryptocurrency system for payments that enables quick and inexpensive ledger transactions. Users can send and receive transactions in Nano in a matter of seconds due to the usage of a block-lattice data structure and a unique decentralized voting system.

Due to the fact that initiatives like NANO cryptocurrency seek to address the shortcomings and limits of Bitcoin, the first cryptocurrency ever established, these projects are referred to as altcoins, or alternative coins (BTC). Bitcoin relies on miners to validate blocks and transactions using a Proof of Work consensus process, which consumes a lot of energy and computational power and raises the cost of transactions. Microtransactions using Bitcoin may take hours to verify and complete, and the transaction costs associated with such payments can be quite high.

With its technology and alternative technological approach, Nano addresses this issue. Like Bitcoin, Nano is based on a blockchain and a decentralized infrastructure, but with significant changes in the consensus process chosen.

Through voting, Nano also establishes decentralization and peer-to-peer functionality. Holders of NANO may cast ballots for representatives who serve as validators. The network's own cryptocurrency, NANO, is utilized for transactions and voting. On the Nano ledger, transactions are free.

Nano was developed by Colin LeMahieu, who has been working on it since 2014 and coding nonstop for almost 5 years. Given Nano's enormous market capitalization, the project is being worked on by a small staff of just 9, including LeMahieu.

Colin LeMahieu is the project's founder and CEO. He started Nano as a side project but later became increasingly enthusiastic about blockchain and its potential, turning it into a full-time endeavor. He graduated with a degree in computer science and worked as a software developer for companies like Dell, AMD, and Qualcomm before developing Nano.

Nano just unveiled an updated plan describing their objectives and development over the upcoming 12 months. A point-of-sale system's alpha release is among the items on the plan, along with integration of fiat currency exchange, greater involvement in international markets, and higher merchant usage.

According to the development team, switching to the Nano PoW infrastructure is the most significant upcoming feature. It was originally scheduled for v20's release, however it has been delayed as the team tests memoryless implementations. The advantages of the Nano PoW infrastructure include better resource management options, faster PoW algorithm changes in future releases, and increased security. 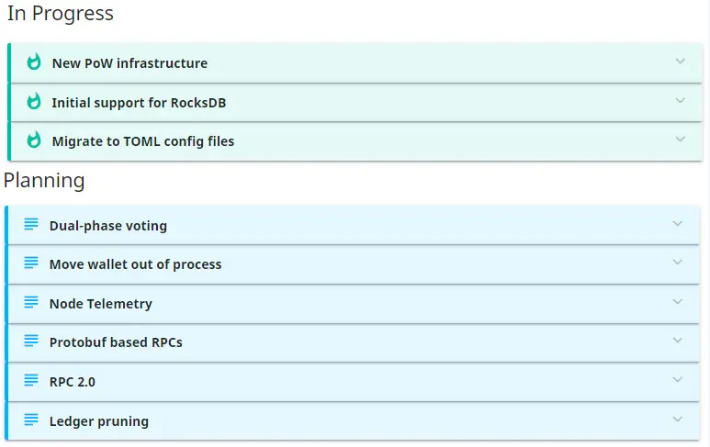 In terms of the protocol itself, the group plans to use ledger pruning to condense the database. It was believed that this was contingent on the use of universal blocks. Nano v11 added universal block support, and the code review has been continuing since February 2018.

Send, receive, alter, and open blocks will all be combined into one sort of universal block. This will enhance internal bookkeeping and pave the way for numerous other enhancements. Ledger pruning is anticipated to be implemented with protocol version 23 as of right now.

The development team is also working on a number of other noteworthy features, which can be seen in more detail on the project's Upcoming Features page.

Where to Store Nano (XNO)

A trusted wallet provider for your Nano (XNO) token could be Trust Wallet – a multi-currency mobile wallet that enables users to simultaneously store a variety of digital assets in one place.

Where to Buy and Sell Nano (XNO)

You can Buy & Sell Nano (XNO) here at BC Bitcoin.

You can Buy Nano (XNO) by heading over to the Buy Coins page of our website. Nano is available on BC Bitcoin trading against major fiat currencies: GBP and EUR. Buying $XNO has never been easier, simply place your order and provide your wallet address. Once your payment arrives, Nano will be sent directly to your wallet.

If you choose to Sell Nano (XNO), you can send us the coins and receive a payment to your bank account. Details and a live valuation can be found on the Sell Coins page.