Launched on 31st March 2015, NEM (New Economy Movement) was originally an NXT fork, before becoming a completely new codebase, written from scratch - following the eventual dismissal of the NXT fork. NEM is a dual-layer blockchain similar to Ethereum, except it was originally written in the popular computer programming language, Javascript, but can now use almost any programming language, making it much more accessible for developers to use the platform. Implementing a Smart Asset System, allows users the ability to create and implement their own unique and customizable smart contracts.

NEM was initially planned to be released in 2014 as a fork-out version of Nxt (NXT), after a Bitcoin Talk forum user called UtopianFuture gained inspiration from NXT. However, in January 2014 there was an open call for participation on a forum to create a completely new codebase and community-orientated cryptocurrency from the ground up. The NEM Foundation is now a Singapore-based non-profit organisation, founded in 2016 by recognized crypto veteran Lon Wong. Nem set out with the goal of not just being another altcoin, but instead providing more technologically and mathematically advanced blockchain solutions. 2 years later, Lon Wong resigned, and Kristof Van de Reck served as an interim president, until Alexandra Tinsman was voted in as president in December 2018. Along with this, the first council’s term came to an end and a whole new council was selected by eligible members. Nem continues to deliver critical updates and partnerships for the project and has extensive experience in developing innovations to blockchain technology.

NEM is planning to release a new core engine called Catapult, otherwise known as NEM 2.0. NEM describe it as ‘the industry’s most practical and secure blockchain for any kind of business data’. Like most other upgrades they are promising improvements on scalability and speed, but also look to bring new features. Some of these features include multi-layer multisignature accounts; native public and permissioned interaction, as well as aggregated transactions.

NEM’s first Catapult Pre-Test which is codenamed Dragon, was released in Q2 2019. This update included a new Harvesting Beneficiary, allowing each node to have the ability to set up a beneficiary public key to share a percentage of their harvesting rewards. Alongside this there were changes to the inflation configuration and Multisignature Transactions. There were also updates to integrate compatibility to Ledger and Trezor hardware wallets.
Q3 of 2019 has in store the Catapult Testnet called Elephant. After realising Proof-of-Importance (PoI) does not involve smaller accounts to the extent that they originally intended, NEM are releasing a new Proof-of-Stake+ (PoS+). Hoping the algorithm will select harvesters more fairly, by determining an individual’s account stake in the system using three sub-scores: Stake Score, Transaction Score and Node Score. It will have more variables than a standard PoS, and should hopefully perform as PoI was intended to, correcting the ‘rich-get-richer’ problem that most industries face.

NEM intend to have the Catapult Public Miannet Release sometime in Q4 of 2019. It will bring a few features that will only be available on NEM Catapult, including being able to set white-lists and black-lists for accounts and tokens you want your account to transact with. Also using aliases, like domain names, in different transactions so its clearer who you are sending to. Along with this a lot of the previous improvements mentioned in ‘Dragon’ and ‘Elephant’ will also be exclusive to Catapult. Going further into the future (2020+), NEM plan a lot of improvement for mobile applications of their systems, along with; voting, delegated voting and mosaic stake voting.

Unlike most other cryptocurrencies, NEM (XEM) uses a Proof-of-Importance algorithm, soon to be called Proof-of-Stake+ (PoS)+. Different to Proof-of-Work (PoW) in which the more computing power you have the more likely you are to retrieve the mining reward or Proof-of-Stake, where the more of a certain Cryptocurrency you own, the higher the chance you are to be rewarded more of that particular cryptocurrency. Proof-of-Importance balances the scale between users, attempting to reduce the wealth gap. It considers how much a user transacts to others and who they transact with. Each user is given a trust score, calculated from their use of the network, which can gradually increase in ‘importance’. The PoS+ algorithm will make slight changes and select harvesters more fairly, by determining an individual’s account stake in the system using three sub-scores: Stake Score, Transaction Score and Node Score. This will hopefully result in a more even distribution of wealth, as anyone who contributes can gain extra XEM.

Rewarding is achieved through harvesting (mining), a process in which a node will calculate blocks and they are added to the blockchain. However, to do this you need to have a ‘vested’ balance of 10,000 XEM (approximately $475 as of 18/09/2019). The XEM you deposit into your account will gradually be vested, at a rate of 10% of your non-vested balance each day. For example, a balance of 50,000 XEM will have 5,000 XEM vested after 24 hours. The following 24 hours, on the remaining 45,000 non-vested XEM, another 4,500 XEM (10% of 45,000) will become vested, and so you will only have to wait 3 days before being able to harvest. This will sadly mean that with only 10,000 XEM, you will never be able to reach the minimum required vested amount to start harvesting. Once you have enough vested, you can start to harvest either through local harvesting or delegated harvesting.

Harvesting is the process used to mine XEM through Proof-of-Importance (PoI), as explained above. You can harvest XEM using 2 different methods:
•    Local Harvesting – This method is initiated if you do not activate delegated harvesting, and only runs whilst your computer is running. The private key of your account is passed to a locally running NIS (NEM Infrastructure Server) and is used to sign generated blocks with your private key (which does not leave your computer at any time, as it is local).
•    Delegated Harvesting – After activating delegated harvesting, you can start harvesting on a remote NIS. Initiating a block chain transaction and costing 6 XEM. The advantage is that even when you shut down a NEM software on a local computer, the remote NIS will continue to harvest for your account. In addition to this you can still harvest on a local NIS. Your private key will remain secure because NEM initiate an ‘importance transfer’. This means that a proxy account is created, and mapping for the importance score is sent here, but the rewards earned are sent to the original account. The proxy account has a zero balance, so no funds are stolen, and it is not possible to transfer your importance score either. 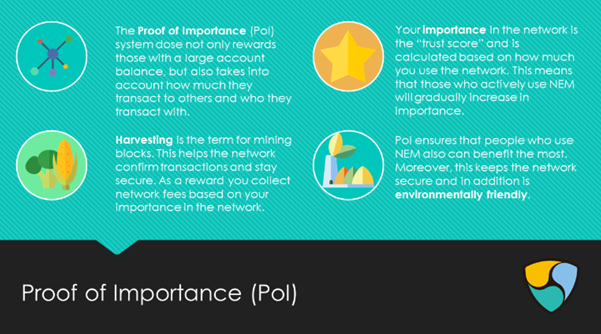 Where to Store NEM (XEM)

https://nem.io/downloads/ provides many different wallets through their site for the storage of XEM, including their very own NEM wallet (available on Windows, Mac and Linux). You can find mobile and desktop wallets from 8 other providers all featured on the site. Most of these wallets are unofficial and developed by the community to improve and provide services on the open-source network. Leading hardware wallet provider Trezor is integrated with XEM and a NEM wallet will come as standard on their devices.

Dedicated Wallet providers such as Exodus are also great for storing, sending and receiving any XEM you may already have or are looking to purchase. It is always recommended that you ensure using a secure wallet, create back-ups and store any sensitive recovery information. As well as, complete your own research and due diligence.

Where to Buy NEM (XEM)

You can Buy & Sell NEM (XEM) by heading over to the 'Buy Coins' page of our website. NEM (XEM) is available on BC Bitcoin trading against major fiat currencies: GBP and EUR. Buying XEM has never been easier, simply place your order and provide your wallet address. Once your payment arrives XEM will be sent directly to your wallet. If you choose to Sell NEM (XEM) you can send us the coins and receive a payment to your bank account. Details and valuation can be found on the ‘Sell Coins’ page.

Since NEM was officially released they have created many innovative methods compared to a lot of other coins. Some of which include their unique Proof-of-Importance (soon to be PoS+) consensus algorithm, delegated harvesting and multi-layer multisignature accounts. Created on a very community orientated belief, with the initial idea coming from online talk forums. NEM have kept this want for a community driven cryptocurrency, allowing members to elect a new council team when need be, as well as being very open and truthful with mistakes they might’ve made or ideas that didn’t go quite as planned (like updating PoI), keeping users constantly updated. Currently sitting at rank 25 by market capitilisation, NEM has a really strong support from the community because they believe in the coin and the foundations it was created on, not allowing the network to be controlled by powerful ASIC-powered mining nodes or whales.