What is Rally (RLY)?

Rally is a blockchain-based social token, designed to provide content creators, digital entrepreneurs, artists, and musicians, including celebrities and athletes, better out-reach and monetisation opportunities. To achieve this, the Rally (RLY) Network is built on the Ethereum (ETH) protocol and is supported as an ERC-20 token. RLY is aiming to establish a new value system for online influencers to engage with their communities and fans. Acting as the digital economy framework, Rally Network users can exchange their $RLY token for new merchandise, access to unique content, early access to NFT’s released by the celebrity and vote toward on network-level developments.

The Rally Network (RLY) delivers brands and individuals a platform to enhance fan engagement by creating their own ‘maker coins,’ or ‘Creator coins.’ Each creator utilises a fully customisable token defined by a Token Bonding Curve (TBC). An Automated Market Maker (AMM) relates the circulating supply of Creator Coins to its price in $RLY.

As blockchain technology, NFT’s and the entertainment and gaming sectors align, Rally (RL) enables creators to directly communicate with their fans, continue expanding their networks, increase revenue or to allocate funds to good causes. Creator Coins are used to involve communities and to motivate participation as stated by the community appointed CMO and CRO for Rally, and a former Patreon executive, Bremner Morris;

"Rally is really a network or a project that enables creators or artists or musicians — anybody with a social following — to launch their own economies …  And what I mean by that is that each of these artists have an existing community of followers and people who are really excited about what they do. But right now there’s not really a mechanism for those followers to show their support and also to participate in the economy of these artists."

One of the platforms most successful streamer personas is Alliestrasza, who has established herself a community economy for all $ALLIE coin holders. Offering fans access to games and tournaments, users who hold the $ALLIE creator coin can purchase NFTs minted by Alliestrasza from Rally’s (RL) NFT marketplace. 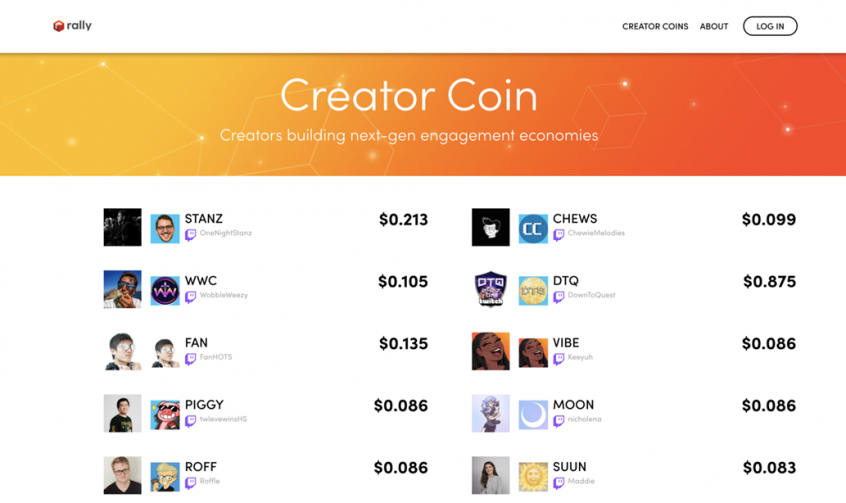 Rally (RLY) was founded in 2018 to give creators the toolkit to form an ownership economy around their brand and content. In August 2020, Creator Coin launched in BETA and released its first 10 creator coin sidechains.

Phase 2 – October 2020: $RLY, the governance token for the Rally Network is launched

$RLY bridge off-ramps launched from Ethereum (ETH) to the Rally (RLY) sidechain, enabling $RLY holders to exit their tokens to $RLY mainnet. $RLY holders will not be able to exit to mainnet via the bridge for a few weeks until v2 is ready in Phase 6.

The Rally Network was developed with the vision to build a unique engagement bridge between creators and their communities. A max supply of 15 billion $RLY has been minted at its launch, with less than 30% allocated to the team. The decentralised $RLY protocol therefore does not implement transaction or network fees and instead, have organised original founders and investors in the Rally project to all hold rights to $RLY tokens, subject to lockups. A total amount of 15.3% is assigned to Seed Investors, over a 4-year vesting and 12 months lock up period. The founding Team has assigned 14.2% with the same vesting and lock-up arrangement.

Bremner Morris is CEO of Rally (RLY), where he previously held the role of CMO and CRO as part of the initial project. Driving out-reach, Morris has experience working in an enterprise-SaaS environment and also oversaw the growth of Patreon's go-to-market organisation, a platform designed for fans and communities to support their creative artists via membership subscription.

Nick Millman is the Vice President of Creator Partnerships at Rally (RLY), who previously served as the COO at BratTV, a popular entertainment organisation. Nick also has extensive experience managing content and creator relationships when he was Global Director.

Stephanie Pereira acts as Vice President as part of Creator Success at Rally, managing fan communication and engagement. Pereira was previously part of the Leadership Team at Kickstarter, where she held the position of Director of Arts, and as Director of Creator Engagement.

Where to Store Rally (RLY)

An alternative wallet provider for Rally (RLY) token holders can be Trust Wallet – a multi-currency mobile wallet that enables users to simultaneously store a variety of digital assets in one place. Popular among traders and gamers, the beginner friendly mobile wallet may be appropriate for users looking for a convenience and accessible app, with trusted security and backup options.

Similarly, a user-friendly option to keep your $RLY secure can include MetaMask, a leading browser wallet extension popular amongst DeFi platforms. Using the Metamask platform does require users to operate via the Ethereum (ETH) Mainnet as $RLY is not supported on other chains supported by Metamask (e.g. Binance Smart Chain).

Where to Buy and Sell Rally (RLY)

You can Buy & Sell Rally (RLY) by heading over to the Buy Coins page of our website. Rally (RLY) is available on BC Bitcoin trading against major fiat currencies: GBP and EUR. Buying RLY has never been easier, simply place your order and provide your wallet address. Once your payment arrives Rally (RLY) will be sent directly to your wallet.

If you choose to Sell Rally (RLY) you can send us the coins and receive a payment to your bank account. Details and valuation can be found on our Sell Coins page.