What is Bitcoin Gold (BTG)?

Bitcoin Gold (BTG) is a cryptocurrency with similar properties to Bitcoin (BTC) that is mined using standard GPUs rather than specialized ASICs. It was founded in 2017 as a user-friendly alternative to Bitcoin. The BTG network intends to bring together the robustness, security, and features of the Bitcoin blockchain with the chance for experimentation and development.

The start-up wants to offer a coin that can be implemented similarly to Bitcoin while also giving DeFi and DApp developers more options to use the token.

ASICs sometimes restrict mining to a small number of powerful players, however GPU mining allows anybody to mine once more, re-establishing decentralization and independence. Instead of going largely to owners of ASIC warehouses, GPU mining profits are distributed to users globally, re-creating the network effects that Bitcoin once had.

The original Bitcoin blockchain's inherent qualities are combined in a special way with a cutting-edge method of creating and using blockchain apps to create Bitcoin Gold. BTG, which is a fork of the original Bitcoin coin, intends to transform mining by implementing a new proof-of-work algorithm that addresses the scalability problems Bitcoin faces.

The Bitcoin Gold Organization is a multi-national group of more than 20 individuals with a range of education and experience. In the summer of 2017, a group of six Co-Founders started it. The Board makes strategic decisions after consulting the Team and Advisors.

Where to Store Bitcoin Gold (BTG) 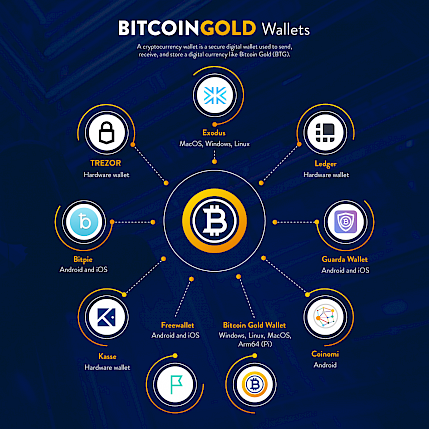 For the full list of compatible wallets please visit https://bitcoingold.org/ecosystem/#wallets.

Where to Buy and Sell Bitcoin Gold (BTG)

If you choose to Sell Bitcoin Gold (BTG) you can send us the coins and receive a payment to your bank account. Details and valuation can be found on our Sell Coins page.