What is NEAR Protocol (NEAR)?

NEAR is a decentralized application platform created to offer a high-performing and secure infrastructure to support the development of scalable decentralized applications (dApps). The network can handle up to 100,000 transactions per second as well as offer instant block creation in 1 second. It additionaly removes the downwards of the systems in competition, including low output and issues associated with cross-compatibility.

NEAR Protocol aims to incentivize a blockchain network to build and launch dApps on the DeFi platform and yield profit through staking and sharding. The core of the NEAR Protocol’s design is the concept of sharding.

Sharding splits the network’s infrastructure into several segments known as nodes to handle a fraction of the network’s transactions. The distribution of blockchain nodes instead of distributing the complete blockchain across network participants. It helps pave the path for a more efficient way to retrieve data and scale the decentralized platform.

The NEAR protocol blockchain is secure and permissionless. It's networks technology consists of a brand new block generation scheme called ‘Doomslug.’ NEAR Protocol is utilized to pay fees for storing data, processing transactions and is also used to run validator nodes on the network by staking currency tokens.

NEAR started in the summer of 2018 when Alex Skidanov (left) and Illia Polosukhin (right) decided to pivot away from their previous entrepreneurial adventure.

NEAR Collective is a globally distributed group of teams, made up of many individual organizations and contributors, who self-organize to bring this technology to life. They describe themselves not as a business or anything nearly as formal. More like the groups of individuals who run large open-source software projects. 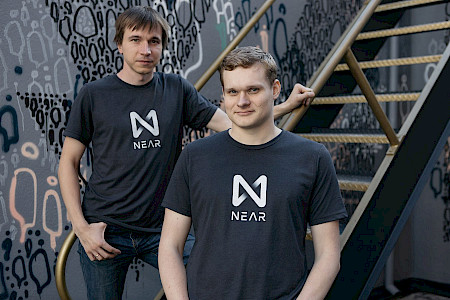 How does NEAR protocol work?

NEAR Protocol uses a Delegated Proof of Stake (DPoS) Consensus Mechanism that helps startups and enterprises with sharding solutions for their scaling.

Let’s look at the sharding solutions that NEAR Protocol provides and how it works:

Sharding is a blockchain structure that permits each participating node to store atiny low subset of the platform’s data. It permits a blockchain to scale more fluently and enables higher transactions throughput per second while reducing the transaction cost. Nightshade allows NEAR to maintain a singular chain of data. The nodes handle the computing required to take care of these data into ‘chunks.’ The nodes process the data and additional information to the main blockchain network. One of the advantages of Nightshade is that its architecture provides fewer chances of failures when it involves security, as the participating nodes are only accountable for maintaining smaller segments of the blockchain. 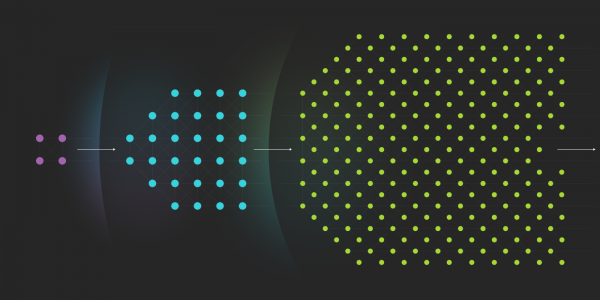 NEAR Protocol has an application called the Rainbow bridge that allows the network participants to transfer Ethereum (ETH) tokens back and forth between Ethereum and NEAR. To move tokens from Ethereum to NEAR, a participant must deposit Ethereum tokens in the Ethereum smart contract. These tokens are then locked on the Ethereum ecosystem, and new tokens are minted on NEAR’s platform, representing the original Ethereum tokens. If a user decides to reclaim their original ETH tokens it is possible to reverse this procedure, since the initial funds are stored through the smart contract. 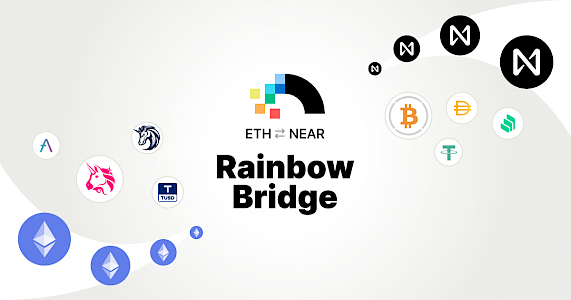 Aurora is a layer 2 scaling solution built on a NEAR protocol for developers to assist them when launching their Ethereum decentralized applications on NEAR’s ecosystem. Aurora is developed using the concept of the Ethereum Virtual Machine (EVM) that allows developers to link their Ethereum Smart contracts and assets seamlessly. 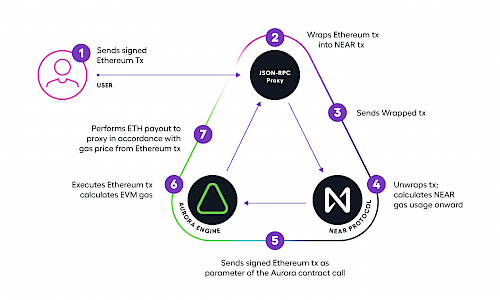 To stake NEAR tokens, users must get their NEAR Protocol wallet account. The blockchain network does not require a minimum amount of NEAR to stake, which implies that users can stake as much or as little of their total NEAR tokens held within the wallet. However, there are two primary ways of NEAR Protocol staking with different roles and rewards depending on the responsibility assumed within the network:

The Proof–of Stake (PoS) requires the validators to stake a minimum threshold of a specific amount of tokens. This amount is dynamic and might fluctuate with the quanity of NEAR tokens staked by other validators. These tokens have often been used as collateral to prevent unethical activities on the network, and any bad actors on the network will get their collateral stake dropped.

The validators are responsible for validating blocks in the network and receiving transaction fees and rewards every epoch (Approximately 12 hours). An Epoch is an era of time within the blockchain network, and Validators can choose not to stake their collateral any time they wish to. In that scenario, the funds will remain locked for three Epochs before it is released.

Use cases for NEAR protocol

NEAR Protocol empowers millions around the globe to invent and explore new businesses and communities for a sustainable and more inclusive future through its developer-friendly features. A fair few of the prominent use cases of NEAR Protocol:

Decentralized Finance is critical for building an open web. Its rise in recent times results from success on Ethereum, super-changing experimentation with blockchain-based financial institutions. Actions that used to take days in traditional finance systems can now be done within seconds because of the use cases of the DeFi. Network congestion, the skyrocketing price of gas, and the ever-growing prices of the tokens makes the entry barrier difficult for new users. But now, NEAR is making DeFi more accessible for everyone, especially those new to the crypto space. With the launch of Rainbow Bridge, DeFi is now live on NEAR Protocol and is unlocked for creators and users worldwide. All the assets that originate in Ethereum are now fully functional and usable on NEAR Protocol-based dApps.

NFTs can be considered digital containers that can hold Internet Protocol, but when it is liberated to be owned and traded, creators worldwide can have new ways to produce, distribute, and monetize content. The foremost concept of NFTs is that it can prove in the digital space that a single individual uniquely owns a file or piece of information. It records the immutable ownership of any asset, whether digital or physical. To put it simply, NFTs allow ownership over Digital Assets.

A decentralized autonomous organization is owned and managed by a community instead of a CEO or a Company. Every member wthin the DAO can participate in the platform’s decision making process by voting to build sustainable models for the respective organization. Near protocol leverage DAO to end the bureaucracy in their organization and supply the token holders with more advanced accounts that can help them store tokens, NFTs, and other assets on the platform.

Where to Store NEAR (NEAR)

You can store your NEAR in a NEAR Protocol Wallet, which is a non-custodial, web-based wallet for the NEAR blockchain. It requires the completion of a few initial steps of setting up an account and confirmation of personal details. Note that the NEAR wallet can be funded with a minimum of 0.1 NEAR tokens. These three tokens cover the cost of creating the NEAR wallet and the new account ID.

Where to Buy and Sell NEAR (NEAR)

You can Buy & Sell NEAR (NEAR) by heading over to the Buy Coins page of our website.  NEAR (NEAR) is available on BC Bitcoin trading against major fiat currencies: GBP and EUR. Buying NEAR has never been easier, simply place your order and provide your wallet address.

Once your payment arrives NEAR coins will be sent directly to your wallet. If you choose to Sell NEAR (NEAR) you can send us the coins and receive a payment to your bank account. Details and valuation can be found on the Sell Coins page.

Disclaimer: The information provided in this article is intended for informational purposes only. It is the readers' responsibility to complete their own research and due diligence.