What is Audius (AUDIO)?

Audius is a decentralized music streaming system that was first developed on the POA network and is now powered on Solana. Audius was founded to address the inefficiencies of the music industry, which are intensified by the lack of transparency surrounding music rights ownership and the presence of intermediaries between artists and their audiences. This platform allows users to directly support musicians using the AUDIO coin. Audius has around 6 million unique monthly users and over 100,000 artists as of December 2021.

Audius chose to migrate to Solana because of the growing demand. The team indicated Solana was chosen for several reasons. First, it’s cheap, offering 1m transactions for 10$. It’s also fast, with block times of 400ms and confirmations under one second. Finally, Solana is decentralized, with over 200 nodes on its mainnet. Staking and governance functionality still remain on Ethereum, with AUDIO being an ERC-20 token.

Forrest Browning - Stanford alumnus, is a co-founder of StacksWare, an enterprise data center management software, and a Forbes 30 Under 30 honouree.

Team also consists of 21 other employees, such as:

May 2018 - Shortly after the project was founded, the project team released an initial version of the Audius whitepaper detailing the plans for the architecture and shipped the first functional implementations of the Audius smart contracts, content node, and discovery node.

January 2019 - 6 months after founding the project, the project team began inviting early users to engage with the protocol and an early client implementation to provide feedback. In this phase, access to the product was granted on an invite-only basis and major issues were ironed out in a controlled environment before introducing 3rd-party node operators into the network.

August 2019 - The Audius protocol began welcoming its first 3rd-party node operators into the network, with artist content and metadata being hosted by end users for the first time. Through this period, as more node operators were onboarded, the project team wound down most of their internally operated nodes, maintaining a few as a canary mechanism to understand how the network is performing.

September 2019 - the Audius first-party client implementation launched publicly for the first time. This included basic functionality for uploading content, playing content, searching for / following artists, and more. Over the following months, many more client features were shipped, including notifications, mobile apps / desktop apps, remix competitions, and a well-documented API for interfacing with user-operated nodes directly. By the end of this testnet period, the protocol was being used by over 500,000 fans every month.

October 2020 - The mainnet launch of Audius is the genesis of the Audius platform token, allowing fans, artists and curators to earn a piece of the platform as a value-added user.

December 2020 - The Audius community will roll out new mechanisms for content ownership and revenue never before possible, backed by the crypto-native primitives driving the protocol under the hood. As a platform well poised to bridge the gap between crypto and a mainstream audience, Audius will always prioritize simplicity to offer an intuitive user experience grounded in web3. To maintain governance weight, participants of the protocol must continually contribute in value-added ways or have their governance power diluted and replaced by others doing the same. In doing so, Audius will live forever as a protocol owned and operated entirely by its users, stewarded by community governance. 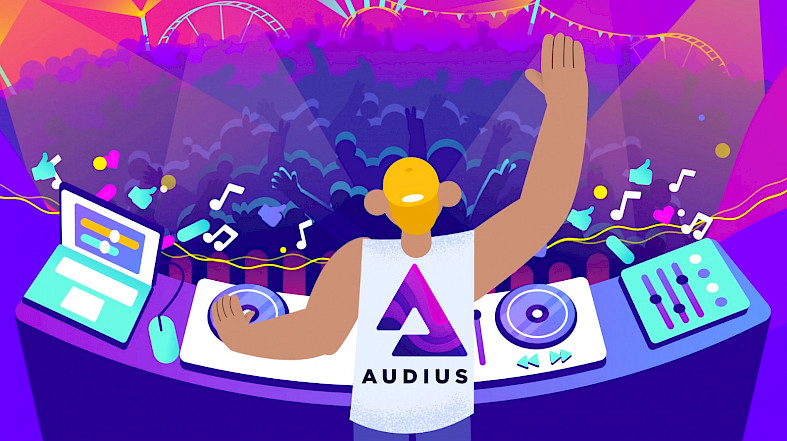 What is the current circulation of Audius (AUDIO) coins?

AUDIO has a total quantity of 1 billion tokens, with 411 million currently in circulation. The annual inflation rate is 7%, and 50 million AUDIO was given to the top ten artists and fans, with 75% going to artists based on stream count. The following is the token distribution:

Tokens can be used as a form of security for value-added services. Node operators can stake AUDIO to help protect the network and administer the protocol, and each token has governance weight.

Where to Store Audius (AUDIO)?

Since AUDIO is an ERC-20-compatible exchange token, it can be stored on wide range of wallets that do support ERC-20 tokens. Options to keep your AUDIO tokens secure and offline can therefore include the leading hardware wallet providers Ledger and Trezor.

Also, AUDIO can be stored in software wallets, such as:

Please refer to our Wallet Guides Page for more detailed information regarding these and other type of wallets.

Where to Buy and Sell Audius (AUDIO)?

You can Buy & Sell Audius (AUDIO) here at BC Bitcoin.

Our customers effortlessly Buy AUDIO by heading over to the Buy Coins page of our website. AUDIO is available on BC Bitcoin trading against major fiat currencies: GBP and EUR. By simply placing your order and providing your wallet address, coins will be sent straight to your wallet after the payment.

If you would like to Sell Audius (AUDIO), you can transfer the coins to us and get paid to your bank account immediately. The Sell Coins page has further information and a live valuation.