What is Tether (USDT)?

USDT is a stablecoin, meaning a stable-value Cryptocurrency. Stablecoins are usually pegged to major fiat currencies such as USD, GBP or EUR. USDT is a stablecoin that mirrors the price of the US Dollar and is issued by a Hong Kong-based company called Tether. USDT’s peg to the US Dollar is accomplished by maintaining a sum of dollars in reserves that is equal to the number of USDT in circulation.

It was initially launched in 2014 under the name Realcoin. This was a second-layer cryptocurrency token that was built on top of Bitcoin’s blockchain, this was done using the Omni platform. Realcoin was later renamed to USTether, where it was then subsequently renamed to USDT, as it is now. In addition to the Bitcoin blockchain, USDT was later adapted to work on the Ethereum, EOS, Tron, Algorand and OMG blockchains.

The specified intention that USDT originally set out to achieve was to merge the unrestricted nature of Cryptocurrencies, which can be sent among users without a trusted third-party mediator, with the stable value of the US Dollar. 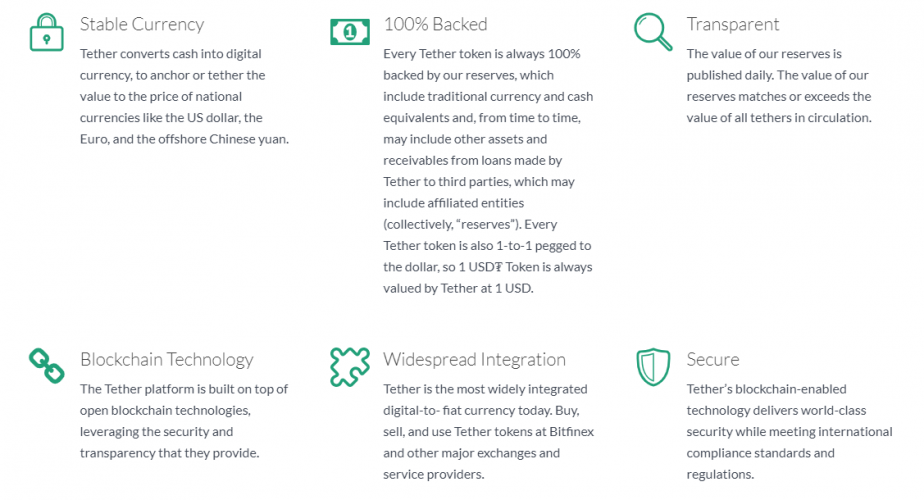 USDT was launched in 2014, when it was known as Realcoin, by Brock Pierce, Reeve Collins and Craig Sellars.

Brock Pierce is a notable business visionary who has helped establish various prominent ventures in the crypto and media industries. In 2013, he helped to establish an investment firm Blockchain Capital, which by 2017 had brought over $80 million up in financing. In 2014, Pierce became the head of the Bitcoin Foundation, a not-for-profit set up to help improve and advance Bitcoin. Pierce has likewise helped to establish Block.One, the organization behind EOS, one of the biggest cryptographic forms of money available.

Reeve Collins was the CEO of Tether for the initial two years of its operations. Preceding that, he had helped establish a few fruitful organizations, for example, the online promotion network Traffic Marketplace, entertainment studio RedLever and betting site Pala Interactive. As of 2020, Collins is leading SmartMedia Technologies, a showcasing and marketing tech organization.

Other than his work at Tether, Craig Sellars has been a supporter of the Omni Foundation for more than six years. The Omni Protocol that they developed permits users to build and trade smart-contract based properties and currencies on top of Bitcoin’s blockchain. Sellars has likewise worked in a few other cryptocurrency organizations and groups, for example, Bitfinex, Factom, Synereo and the MaidSafe Foundation.

Tether has come a long way and still has a long way to go, you can keep up to date with all of Tether's announcements here.

Where to Store Tether (USDT)

There are many wallets to choose from to store Tether (USDT). There are Software wallets such as Exodus, Atomic Wallet and Trust Wallet that support a wide range of Cryptoassets including USDT. Also Hardware wallets such as Ledger or Trezor to securely store your assets.

We recommend using Exodus to store USDT as Exodus has a very user-friendly interface and supports most cryptocurrencies. Your USDT wallet address can be prominently displayed within Exodus ensuring ease of use when sending and receiving this coin. The platform also presents a real time portfolio valuation and tracks the value of digital assets held.

We always recommend our customers to perform their due diligence and research into any platform they are looking to start using. You may find some general information regarding various wallets on our Wallet Guides page.

Where to Buy and Sell Tether (USDT)

You can Buy & Sell Tether (USDT) here at BC Bitcoin. You can Buy USDT by heading over to the Buy Coins page of our website. USDT is available on BC Bitcoin trading against major fiat currencies: GBP and EUR. Buying USDT has never been easier, simply place your order and provide your wallet address. Once your payment arrives, USDT will be sent directly to your wallet.

If you choose to Sell Tether (USDT), you can send us the coins and receive a payment to your bank account. Details and a live valuation can be found on the Sell Coins page.